What is the ESPD?

The ESPD (Scotland) is a standard questionnaire that allows buyers to identify suitably qualified and experienced bidders. It contains questions on both exclusion and selection criteria.

Bidders will use their ESPD response to indicate whether their organisation meet the requirements of the procurement exercise. The form is a self-declaration forms and suppliers do not need to provide any evidence upfront unless their are clear reasons for doing so.

When should I use it?

Buyers must issue an ESPD for procurement exercises over the OJEU threshold (Route 3) and it is recommended that it is also used for all route 2 procurements.

The ESPD can be used as part of either a single stage or multi stage procedure.

A single stage procedure asks bidders to submit all relevant information at the same time.  This will usually take the form of a completed ESPD document, alongside the bidders response to the rest of the procurement documents.

In this instance it is recommended that the bidders’ ESPD resonponses should  be assessed on a pass/fail basis, as there is no requirement to shortlist.

In a two stage process bidders will provide the information in two distinct stages.  Firstly the bidder will submit the ESPD for evaluation by the buyer.  All of the exclusion questions and all of the selection questions will be assessed on a pass/fail basis, with the exception the technical and professional ability section is most commonly assessed by scoring responses.

The technical and professional ability section of the ESPD can include a scoring a weighting methodology which allows the buyer to rank responses and shortlist a number of bidders to invite to tender. The scoring and weighting methodology must be fair, transparent and clearly explained to bidders in the procurement documents.

Buyers should define the scoring and weighting, along with any thresholds in the contract notice. 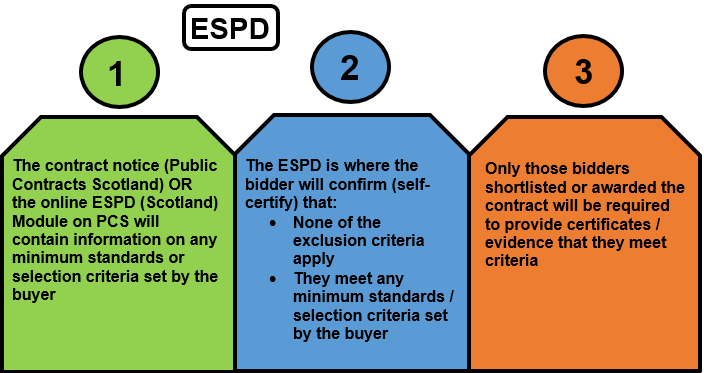 How can I create an ESPD request?

What Types of Questions can I ask?

The exclusion criteria questions are split into two types:

The bidder must be excluded from the procurement process if the specified offences have been committed and they have not taken sufficient self-cleansing actions. For further information, pleaser review the exclusion criteria station.

Futher information can be found on the Exclusion Criteria Page.

In most cases the bidder must be given the opportunity to provide evidence that they have taken sufficient and appropriate remedial action i.e. they have ‘self-cleansed’. If you are satisfied that the provided evidence provided is sufficient to demonstrate reliability, you should not exclude the bidder from the procurement procedure on those grounds

The bidder must satisfy that it has:

When considering any self-cleansing measures, organisations must consider all relevant factors.  This includes the gravity and particular circumstances of the criminal offence or misconduct.

If you believe the bidder’s remedial action  is not sufficient to demonstrate reliability, you must provide the bidder with a statement outlining the reasons for the decision.  The statement of reasons must be provided in writing as soon as is reasonably practicable to allow the bidder to understand why the self-cleansing measures taken are insufficient.

In the case of tax and social security breaches where self-cleansing does not apply, the bidder should not be excluded if they have fufilled their obligations by paying or entered into a biding agreed with the view to paying monies due or the obligation to repay otherwise ceases.

Buyers must only include the selection questions that are relevant and proportionate to their procurement exercise and delete the ones that are not. Therefore, it is unlikely that you will need to ask all of the standard ESPD questions within your ESPD request.
Questions in the ESPD are generic. Therefore,the buyer must supplement the standard ESPD questions with specific criteria or minimum requirements relating to the contract.
Please note: that no extra questions should be added to the ESPD form.
For more detailed information refer to Exclusion, Selection and Award.

Where do I specify my minimum requirements?

Depending on what format you issue your ESPD request in will influence the way in which you specify the criteria and minimum requirements.

If using PCS-Tender or the ESPD (Scotland) Word Document, you should set out your specific requirements and minimum standards  in the Contract Notice (or the PIN if that is being used as a Call for Competition).

If using the online ESPD (Scotland) module within PCS, you should include your specific requirements and minimum standards with the corresponding ESPD question.

A set of standardised statements may help you to explain these requirements in a consistent format.

What are standarised statements?

This set of standardised statements has been developed to support you in explaining your selection criteria to bidders.

Each standardised statement is aligned to a selection question in the ESPD (Scotland). Buyers should select thse statements that are relevant to their procurement exercise and in some instances, you are able to adapt them. The full list of statements can found in the standarised statement document and an example is included below:

Some of the standardised statements, for example those relating to Environmental Management Legislation and Quality Management Proceudres, are very lengthy. Therfore you should review these carefully and ensure that you only select only those parts of the standardised statements that allow you to specify your minimum requirements. You should be careful to ensure that the criteria included is proportionate and not overly onerous on the bidder.

This process will enable you to adopt a standard approach to defining the selection criteria in Contract Notices (and in PINs being used as Calls for Competition).
If using the online ESPD (Scotland) module on PCS there is no need to add the statements in the contract notice, it should be added directly to the module.

As the ESPD is designed to be an inital self-declaration form, bidders are not required to produce supporting documentary evidence upfront.  Evidence maybe requested from the successful bidder (s) at the end of the first stage of a two stage procedure or prior to awarding the contract.

If the bidder is unable to provide this evidence, upon request and without delay, it should not be taken forward to tender stage or be awarded the contract.

Exceptionally, where you have a genuine concern and there is a risk to the effective conduct of the procurement exercise, you may request, at any time, all or part of the supporting documents. Such requests can be made to the bidder or; any subcontractors, consortia members or other bodies whose capability and capacity will be relied on to perform the contract.

What do I need to do if the bidder is relying on other parties?

Where the bidder is relying on other parties to meet the selection criteira, you should request a separate ESPD (Scotland) response from each party bing relied on.

These parties should complete the exclusion criteria section of the ESPD and whichever selection questions, the main bidder is relying on them for.

This should be evaluated along side the main bidders ESPD.

Where a party meets the mandatory grounds for the exclusion,  you must require that the main bidder to replaces them.

Where there are discretionary grounds for the exclusion you may require them to be replaced.  This should be considered on a case by case basis, taking into account the various circumstances of the procurement exercise.

How Do I Shortlist Using the ESPD?

Open or close
Shortlisting in the ESPD allows a buyer to rank responses and this is mainly done within the Technical and Professional Ability section.  This will allow buyers to determine who should be shortlisted and who should be taken forward into the next stage of the procurement exercise.
How you will ‘shortlist’ bidders must be detailed in the Contract Notice or Prior Information Notice (PIN) (if that is used as a Call for Competition).  This should include weights and scoring, where applied, with an explanation of the scoring methodology.  These criteria must be objective and non-discriminatory.
For more informaton, go to selection criteria.

ESPD in Care and Support Services

In the case of Care and Support Services, the mandatory selection grounds (regulation 8 of Procurement (Scotland) Regulations 2016) must be applied to all procurements. An organisation can also choose to apply the discretionary exclusion grounds and selection criteria and can also choose to use the ESPD (Scotland) for this purpose without amending the questions, and it is a matter of best practice to do so.

Will Brexit Impact the ESPD?

If you have chosen to use the ESPD for your Route 2 procurement, you should continue to apply it in line with the current ESPD regulations as normal and if there are any changes in the future these will be communicated.

Make sure you are signed up to the Procurement Journey  "Notify Me of Changes" service on the homepage to receive information on future changes to both the EPSD and the wider guidance.

Global Question for all Selection Criteria

Buyers may consider allowing the bidders to answer the global question to confirm they meet ALL selection criteria as specified in the Contract Notice.

If the buyer chooses to include this global question, they should be confident that by NOT answering any other question on selection criteria there is no risk to the procurement process, the supply of goods, services or works as a result of the bidders response.

If you choose to include this question, then you can also use the questions in Part V, which ask bidders to describe how they meet the shortlisting criteria you have set out in the contract notice.

How do I use Part V of the ESPD?

If you are using the online ESPD (Scotland) module on Public Contracts Scotland (PCS) and want to include a financial ratio as part of the ESPD, you will be required to choose from a standard list of available ratios, which were introduced by the European Commission (EC) to enable interoperability between online ESPD services. There are also other financial measurements included in the ESPD module on PCS, such as turnover, that organisations are also able to take into account.

Some users have commented that the EC standard list of ratios does not include some they are familiar with, such as Acid Test Ratio, Gearing and Net Profit Margin. In most part the differences arise from EC terminology/methodology is different to that known by our user,  and in a couple of cases the thoroughness of the EC means they provide two similar but different ratios that in combination provide the same result as that.

The Scottish Government Accountancy Services consider that the current list of EC financial ratios is valid, and that using a combination of these ratios can provide the same result as using the alternatives suggested by users..

The ESPD Financial Ratio document can be found below provides guidance on how to utilise the ratios in the ESPD module on PCS to get the required result.

Please note that the Microsoft Word version and PCS-Tender versions of the ESPD are unaffected by this as organisations can manually enter their required ratios rather than selecting from a drop-down list of pre-populated ratios, as is the case on PCS.

Any documents you need are listed below